The 2011 Annual Dinner and Awards took place on 25th November 2011 at Cucklington Village Hall with our President, Malcolm Hooker presenting the trophies.  Malcolm referred to the many challenges facing all organised team sports, namely the competing pressures of modern social and family life.  However the reward of seeing youngsters develop into talented cricketers and sportsmen was not only good for the club but also for their own confidence and character that would last them a lifetime.

The first awards were for Harvey Chinnock who won the Young Cricketer award, George Wayman with the All Rounder’s Cup and finally Simon Beetham who scooped both the Batting Cup and the Bowling Cup.

The “Player’s Player” award where the players themselves choose the winner  –  the John Bagnall Tankard  –  went to Adam Beetham while Simon Dodd received the David Rose Cup marking our very own “Personality of the Year”.

The “Champagne Moment” award was presented by Alex Gibbs to Tim Ovenden for his magnificent ‘caught and bowled’ wicket in a Three Counties match against Thornford early in the season, helping to inspire Buckhorn to victory against unequal odds.  The rather less coveted “Golden Box” award went to Simon Beetham for his dropped catch against Stalbridge, proving that SB is only human! 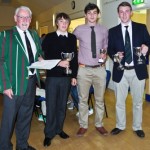 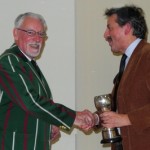 Simon Dodd receiving the David Rose Cup, marking our “Personality of the Year” from the President, Malcolm Hooker 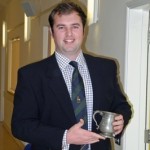 The players themselves choose the winner of the John Bagnall Tankard which this year was awarded to Adam Beetham.

Many thanks to all who attended and helped make the evening another great success, as well as to  every one who had contributed so willingly during the season towards the club’s successes and progress.