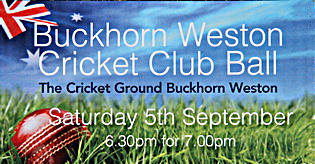 Dress: Black Tie or near offer!

On Sunday 28th June we have the Waitrose sponsored Six a side all day tournament being run at the club, this will be a fun day with BBQ and drinks available starting at 10:30am sharp!  Please come along to play, help out or support!  Again the more the merrier, would be great to have as many teams out there as possible.

There will be nets this Friday evening at 6:30pm for any interested adults and U15s, Jonny Reach is running this, please come along the more the merrier!

Meet at 2pm for Tee Off at 2:30.  Please let Alex know numbers and see our Golf page for details plus Alex’s report from Ashley Wood last month.

For years Buckhorn Weston Cricket Club, whose ground is one of the most attractive and best equipped in the area, has had problems in periods of sustained wet weather.  The ground has clay topsoil overlying clay undersoil, and takes a very long time to dry out after heavy rain.  Games have had to be cancelled, even when no rain is falling, as the ground conditions have not been suitable for play. Now, thanks to a grant from Sport England under their Protecting Playing Fields programme, the Club hopes that its drainage problems are about to become a thing of the past.  A contract has been awarded to M J Abbott Ltd of Dinton, near Salisbury, to construct a perimeter catchment drain around the boundary of the cricket field.

The project has been designed by Total Turf Solutions Ltd. of Quinton Green, Northampton  –  a firm of turf agronomists appointed by Sport England  –  who are the project managers. ‘ Their advice to the Club has been that the best way to seek to prevent the ground from becoming saturated is to capture the moisture descending from higher ground and to disperse it so that it does not get on to the playing area.  M J Abbott Ltd hope to complete the work by the end of April 2015, and the Club expects to feel the benefit of the work during the 2015 season, which is just beginning.

Robin Hall, the Club’s Chairman, said: “We are very pleased that Sport England saw fit to back our application for funding for this project.  We know that many other Clubs, who were also affected by the extreme wet weather in 2012, applied for grants but were not successful.  This is quite a major piece of work which we would not have been able to achieve without help from a grant funding body.” Buckhorn Weston Cricket Club has a full schedule of fixtures for the 2015 season, including Ranston League games, Sunday league and friendly games and North Dorset and other youth cricket.  All are welcome to come to the ground to watch and support the Club.  Potential new players are also most welcome  –  phone Robin Hall on 01963 370357 or Malcolm Hooker on 01963 370086.

You can find the 2015 Fixtures for Weekend matches, Buckhorn Stingers, Ranston League as well as the North Dorset District Under 15’s and Under 13’s all on our web.  The 2015 Committee & Officers can be found under the “About Us” menu tab.

Fixture Cards will be available shortly.

DON’T FORGET the first of our two Club matches this month to kick our season off is this Sunday!

These games also act as Registration Days – we have reduced our senior membership fee to £20 (which helps cover the costs of ground upkeep and insurance – only paid up members are covered by the Club’s insurance).