Our first Sunday match of 2020 began with the presentation by Pam Maynard of a commemorative bell in memory of her husband, Tony Maynard, an enthusiastic umpire and club supporter.

Pam, supported their family, rang the bell to signify the start of the match against Marnhull.  Thanks to Rodney Wayman for these memories of the day.

Please note that Club Membership is now due, if you want to play for BWCC then you are required to complete a membership form and pay your respective fee.

BWCC Fixture list for all groups including Ground Hire – subject to change..

Here is the ECB Guidance that must be adhered to by all players, club officials, parents, spectators etc whilst playing recreational cricket either at Buckhorn Weston or at Away games. Please read and follow the guidance. A PDF document version is available via the ECB Website here 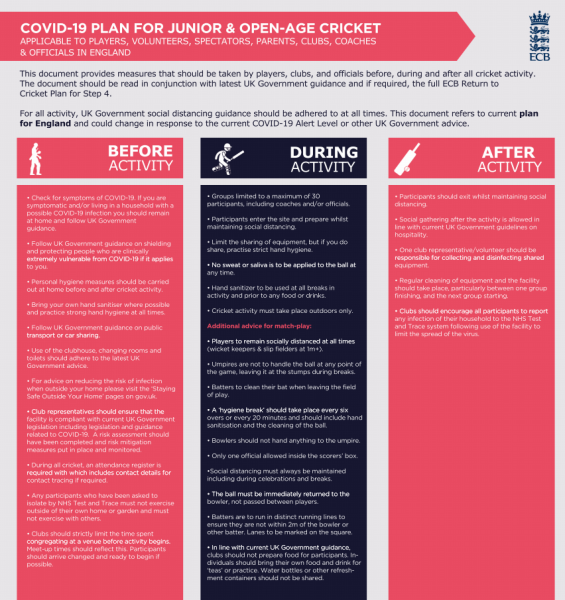 What a strange and difficult period this has been, and will no doubt continue to be so for some time yet.

However, it is wonderful that recreational cricket can resume and we will be trying to pack as much cricket as possible into the remainder of the season.  Men’s cricket will resume shortly and pick up on the fixtures that had already been arranged.  The ladies should have been playing in their inaugural North Dorset evening league (promoted and organised by BW) but that has fallen to lockdown.  Instead they will be arranging friendlies which will be played over the coming weeks.  The Buckeroos too have lost their league season but local clubs are already in contact to arrange friendlies for them.

Fixtures will be posted on the website soon and will be added to as the season progresses.  There is still uncertainty about – one club has cancelled its remaining games and others may follow, which will lead to odd gaps and late additions/changes. So keep an eye!

It does have to be stressed though that we are absolutely not returning to cricket as normal, for this season at least.  The rules for ‘adapted cricket’ have still yet to be published, and social distancing and the need for constant cleaning/sanitisation procedures will have to be in place.  But with good humour and common sense we can make it work.

We look forward to seeing you all in the coming weeks, and thank you for your continued support,

The Buckhorn Weston Village Community Trust will give an update on the situation regarding The Stapleton Arms to the Annual Parish Council Meeting.

For those interested, please come along to the APCM at
7:00pm Monday 2nd March 2020
at the
Buckhorn Weston Village Hall.

Note 1: The APCM is at 7:00pm followed by the Full Parish Council Meeting at 7:30pm
Note 2: BW and KM Parish Council website: https://bwandkmpc.org/
Note 3: This information posted on behalf of BWVCT, www.bwvct.org.uk