Buckhorn’s players arrived suitably smart for the annual President’s Day Game against the Hampshire Maniacs and the team looked in good shape, with the return of the Sherbornians and other casualties to exam season.  The Maniacs were unbeaten against Buckhorn, but the games have been starting to get much closer of late; so today was set to be an exciting contest.  Play commenced after players on both sides enjoyed a ploughman’s lunch, served up courtesy of Suzanne Beetham and Karen Chinnock and desert provided by the Owens.  It was a brilliant spread and was testament to the efforts put into producing it, which were much appreciated by all.

Buckhorn won the toss and opted to bat in overcast and gloomy conditions.  The favoured opening pair of Simon B and George Wayman started the innings, but Bovill (ex-Hampshire and Durham Uni. Opening bowler), opening the bowling for the Maniacs, soon had him caught at 2nd slip by McMillan for 3.  Wayman’s early departure saw George Ellwood enter the fray and he looked in good touch from ball one.  George and Simon played carefully, but with freedom as well, running hard and finding the boundaries on occasion.  Simon was dropped fairly early in his innings at long on, but besides that chances were few and far between; consequently the Maniacs were beginning to lose patience, with neither Deacock or McMillan (ex-Oxford and Combined Universities Capt. and another ex-professional) could get a breakthrough, however the return of Bovill saw him get Simon B trapped LBW for 45, attempting to work Bovill into the leg-side.  Charlie Leach returned to the side and batted at 4.  He and George Ellwood played well together, both in an aggressive mood.  George Ellwood went past 50 with a 6 (!!) and continued to press on, looking to set a big total.  Charlie was in great form, treating the bowling of the Maniacs with distain and making a quick-fire 50.  Charlie and George continued in the same vain until the last few overs, but Charlie was caught in the deep for a dominant 70, bringing his and George’s 132-run partnership to an end.  The skipper – Adam B – came to the crease with two responsibilities: swing from the hip; and see George Ellwood get past 100.  The latter was achieved as George brought the many spectators to their feet, by bringing up his second 100 for the club.  Buckhorn finished on 236 from their 35 overs, and George ended on 113* and Adam 3*.

The Maniacs had a large target to chase and a stiff bowling attack to overcome.  Simon ‘Daffy’ Dodd and George Ovenden opened the attack and kept things tight, preventing the Maniacs from getting away.  Daffy bowled a solid opening spell, but got smashed for 17 in his last over; however he finished with 6 overs 0/40.  George Ovenden bowled exceptionally well at the Maniacs openers of Norris and Sutcliffe (formerly of Oxford Uni., Leicestershire and Lancashire) and was rewarded with the big scalp of Sutcliffe, with the help of a sharp catch-off his shoulder-by Simon B.  The rest of the Maniacs innings was dominated by short, yet belligerent, innings.  Tom Blomfield and Charlie Leach were brought in to the attack and continued the good work of the openers, each picking up a wicket.  Tom received some harsh treatment from McMillan, who smashed his first ball from Tom for 6, then his 2nd ball he reverse swept over short-3rd man; however made a vital and deserved breakthrough.  Charlie Leach combined deceptive variations and good pace with accuracy, seeing him trouble the Maniacs’ batsmen from his 1st ball; he finally made the crucial breakthrough, trapping the reverse-sweeping McMillan LBW with a toe-crushing yorker.  George Ellwood and Oliver Gash were introduced late on and each picked up a wicket.  Norris reached a powerful 56, but was caught in the deep off George Ellwood towards the end of the innings and Oliver clean bowled the President’s son for a duck.  Will Ellwood bowled to final over, burgling a wicket and seeing Buckhorn to a 54 run win – or winning draw if you support the Maniacs! 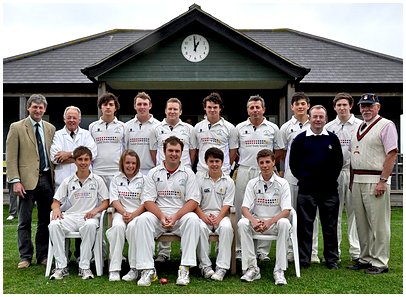 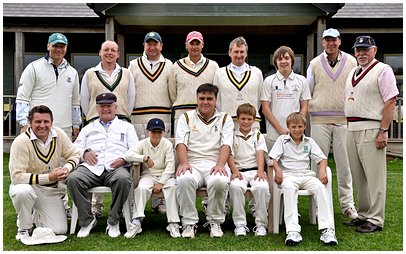