Last week something very unusual and very special happened on a local cricket field. One of our u13 and u15 players, Tommy Stewart, was playing a school match. Having opened the bowling Tommy finished his spell with the figures of 10 wickets for 2 runs!

However good you are, the skill, effort and bit of luck to pick up all 10 makes this a remarkable and very special moment. And it seems the media agrees – the feat has now appeared in The Times, on Radio 4’s Test Match Special and the Blackmore Vale Magazine, no less.

Hats off to Tommy! 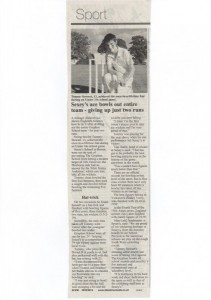 The day began with an unprecedented event on May bank holiday – the sun rose without cloud or the threat of rain. Ahead lay the much anticipated inaugural match between Buckhorn and a touring side from London: the Sands End Swordsmen. END_OF_DOCUMENT_TOKEN_TO_BE_REPLACED 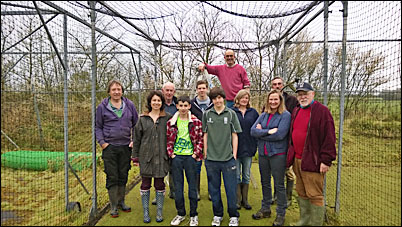 Many thanks to those who worked hard on the first Saturday in April to get the grounds, nets, and pavilion in shape for the coming season.

They also made sure the all-weather strip is ready for the coming summer: hopefully just an insurance against another damp summer!

There will still be more to do both before and during the season  – and we really do appreciate any help you can offer, so do please get in touch with Robin or Simon.   And if you don’t know Robin, he’s the tall one standing at the back!

Have you received your copy of our new March 2014 Newsletter?  You can view it online (or download it) here.

Then please email us at info@buckhornwestoncc.co.uk to ensure you’re on our subscription list!

All members are invited and encouraged to attend.

Last Friday, 10th January 2014, saw a good crowd gather at The Stapleton Arms to put the 2013 season to bed and look forward to the 2014 one.  Drinks were drunk, good food was eaten, awards were made and abuse was given out!

We look forward to seeing lots of people at the indoor nets sessions (see initial details in recent post) and at the ground when the sun finally shines again.

If you click on the box under the slide caption, you can select the photos one by one.

LATEST (and I don’t plan any further updates as at Thursday 23rd Jan): Dorset Highways are firmly on the case this morning, having installed a high capacity pump.  They will run this periodically over the weekend so hopefully the water level will drop sufficiently to allow the drains to be investigated next week.  The water level had dropped last week for a while after a Highways bowser pumped it out on Friday (40 tanker fills!) and a few cars then made it through safely – no problem for tractors.  However after overnight rain early on the Saturday, the level increased by two courses of bricks (roughly 6 inches) so I would guess it was at least over a foot deep.  [When I took Toffee for her walk with my wellingtons on the Monday, it was closer to 2 foot deep].  At its deepest a week earlier, the level was another 7 courses higher, over 3 foot deep in total.

The red Road Closed sign and Police Road Closed signs have been replaced by Flood warning signs and as the underlying problem remains for the moment (and the pump not running continuously) there can be no guarantee that the road will be clear so it is recommended to use the top road via Sandley.  For those approaching from the BW side at night there is virtually no warning as the road drops very quickly around the blind bend of the bridge.

To avoid the bridge, the top road through Sandley and down via Shepherds Hill is approximately a 3 miles detour.  According to those who have pulled cars out since before Christmas, ten cars have had to be rescued including a Landrover with quite a few written off.  Apparently, one just before Christmas had a young family and a car load of presents: they were rescued from the flooded car by firemen who then took them home – in the fire engine!