How about a smart new shirt, rain jacket or cricket cap, all complete with the Club logo!   You can find these on the www.cjiclothing.com website but just click here to go direct to our dedicated Buckhorn Weston Cricket Club pages.

Simon B has now generated this 2013 season’s stats which you can find by looking under the Statistics menu item above. 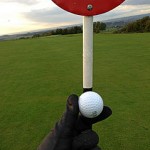 Read Alex’s report on their trip to West Wilts on Mon 14th Oct. on the Golf page

With over 36 individual competitors, and 10 teams, it was a shame that Sunday afternoon’s  weather on 13th Oct 2013 was unkind for the first time in the history of the annual conker championship at the Stapleton Arms.  Despite erecting the conkerdome outside it was deemed too wet and Ash, our very forgiving landlord, allowed mayhem to breakout inside the pub.  Anyone who thought they might have a quiet Sunday lunch might have been disappointed but many more embraced the challenge and joined in.

There were many more children than usual which was great and it was no surprise that the final was contested by a 10 year old – Hayley, and 6 year old Rebecca Marshall.  After a tense passage of play it came down to the conker equivalent of a penalty shoot out.  Best of ten strikes and they were still even; you could have heard a chestnut drop, as young Rebecca took her second strike, bootlace pulled tight between white knuckles of left hand and index finger of right, eyeball level with string, she fired.  A gasp and groan from the crowd, as sadly she missed, and Hayley was crowned worthy champion.

The dePelet family and the Marshalls had already been in the final of the team comp, and again had proved triumphant.  The ‘Smashers’ beating the ‘Knibblers’, having pulverised the ‘would be winners’ and the ‘conquerors’ on route.

The afternoon made £100 for the church bell fund, and £30 for the cricket club.  The organisers Alex Gibbs and Rupert Dyke, aka Headmaster and Head Boy, probably as relieved as Ash that everyone had survived with nothing more than a few bruises and smashed horse chestnuts.  Nothing worse than having to present yourself to matron with bruised horse chestnuts.  Is it the liniment or the application?  oo err.

P.S. Thank you to all participants, especially those who may have given up going to the World Championships, which were being held the same day in Southwick, Peterborough. Although we do realise the Stapleton is a far superior pub. 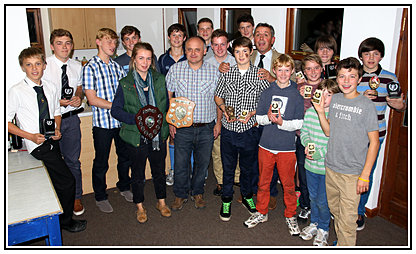 CELEBRATING THE END OF A GREAT SEASON

The evening was introduced by the club Chairman, Jeremy Owen. The awards were presented by Adam Beetham, Club Captain, Simon Dodd, u13 Coach and Mark Chinnock, u15 Coach.

The evening culminated with the announcement of the clubs intention to enter Dorset League Saturday cricket in 2014, which received a rapturous round of applause, especially from the young players who will be the core of the side.

Under 15’s achieve the 2013 Double: NDCC League and Cup Champions 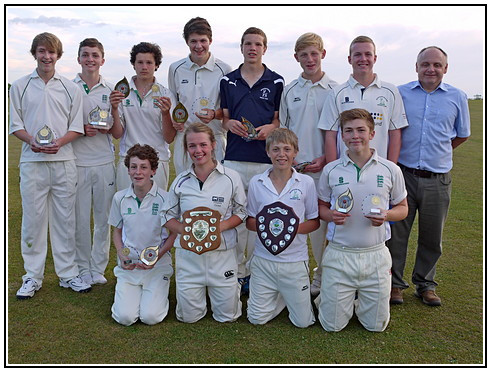 A pleasant evening at Stalbridge started with us losing the toss and Stalbridge deciding to bat.  Harry Woolway and Rueben Salisbury opened the bowling to maximum effect.  With Harry taking 4 wickets and Rueben taking 2 within the first 8 over’s.  This continued with Angus Davis taking another 2, Tom Dunn and Max Chinnock finishing them off within 13 over’s for a small total of 48 runs. Throughout the innings the whole of the fielding was outstanding and overwhelming for Stalbridge.

The first two batsman were Harry and Tom and within 4.2 over’s they had between them easily reached the target with some very big hits (inside the tennis courts)!

A presentation was held straight after the match where it was confirmed that Buckhorn Weston U15’s had achieved the Double by winning both the League and the Cup.

I would like to thank all the young players for their outstanding effort and behavior during this match and the excellent sportsmanship portrayed by all.  They are all a credit to Buckhorn Weston Cricket Club and have always been throughout the years I have coached them.  I would also like to thank all the parents for their commitment over the past years.

Finally, on another note I would also like to congratulate the U13’s for their successful season by reaching the U13’s Cup Final and finishing 3rd in their League.